Skip to main content
It looks like you're using Internet Explorer 11 or older. This website works best with modern browsers such as the latest versions of Chrome, Firefox, Safari, and Edge. If you continue with this browser, you may see unexpected results.
Library Home

Kalapuya Guide -- created in collaboration with the Confederated Tribes of Grand Ronde: Home

The Confederated Tribes of Grand Ronde

"The Confederated Tribes of the Grand Ronde Community of Oregon is a federally recognized Tribe that includes over 30 Tribes and bands from western Oregon, northern California, and southwest Washington. These include tribal bands from the Kalapuya, Molalla, Chasta, Umpqua, Rogue River, Chinook, and Tillamook. The Tribe is active throughout its ancestral homelands but located in western Oregon where it has a 11,500-acre reservation in Yamhill County. With approximately 5,400 enrolled tribal members, the Tribe is governed by a nine-member Tribal Council that is elected by the Tribe’s voting membership.

The Tribe’s vision is to be a Tribal community known as a caring people, dedicated to the principles of honesty and integrity. The Tribe is committed to the responsible stewardship of human and natural resources while striving to be a community willing to act with courage in preserving tribal cultures and traditions for future generations."

The Confederated Tribes of Siletz

"The Confederated Tribes of Siletz is a confederation of many bands and tribes, each with its own language, territory and customs, whose ancestral homelands combined include all of Western Oregon from what is now Northern California north to the Columbia River and from the summit of the Cascades to the Pacific. The 1.1 million-acre Siletz Reservation was set aside by President Pierce on Nov. 9, 1855, to reserve a permanent home for our Tribes that under continued threat of death were forced to cede approximately 19 million acres of their lands to the U.S. government under treaty agreements. After the people were relocated to the Siletz/Coast Reservation, the seven ratified treaties of the Willamette, Umpqua and Rogue Valley Tribes were ignored. The 1855 Coast Treaty was not ratified, but the Tribes held to its terms without the United States fulfilling its promises. By 1875, more than 900,000 acres of the Siletz Reservation had been taken and opened to settlement without treaty agreement, recognition of rights or compensation. Starvation, violence, abuse, exposure, depression, epidemics, boarding schools and unscrupulous Indian agents took their toll. The effects of the 1887 Allotment Act continued to reduce the Siletz Tribe’s sovereign jurisdiction, lands and resources. Finally in 1954, Congress passed the Western Oregon Termination Act, severed Tribal relations, took the last scattered parcels from Tribal members by 1956, and tried to take our identity as Indian people as well. Still, the Siletz people and culture endured."

Confederated Tribes of Grand Ronde Map (click through to learn more at grandronde.org) 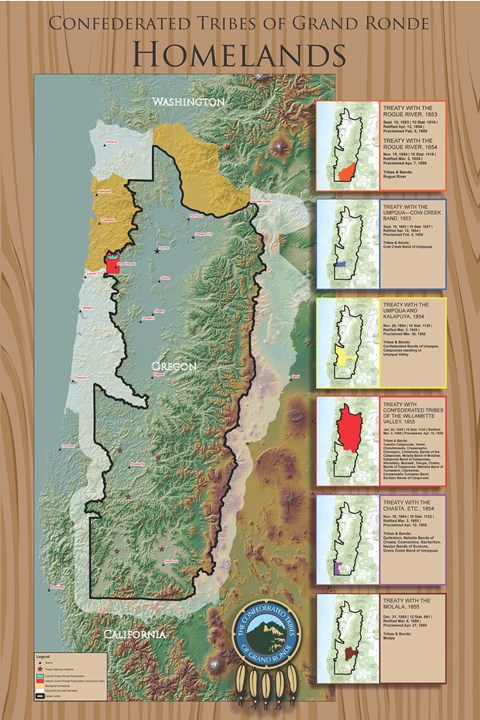 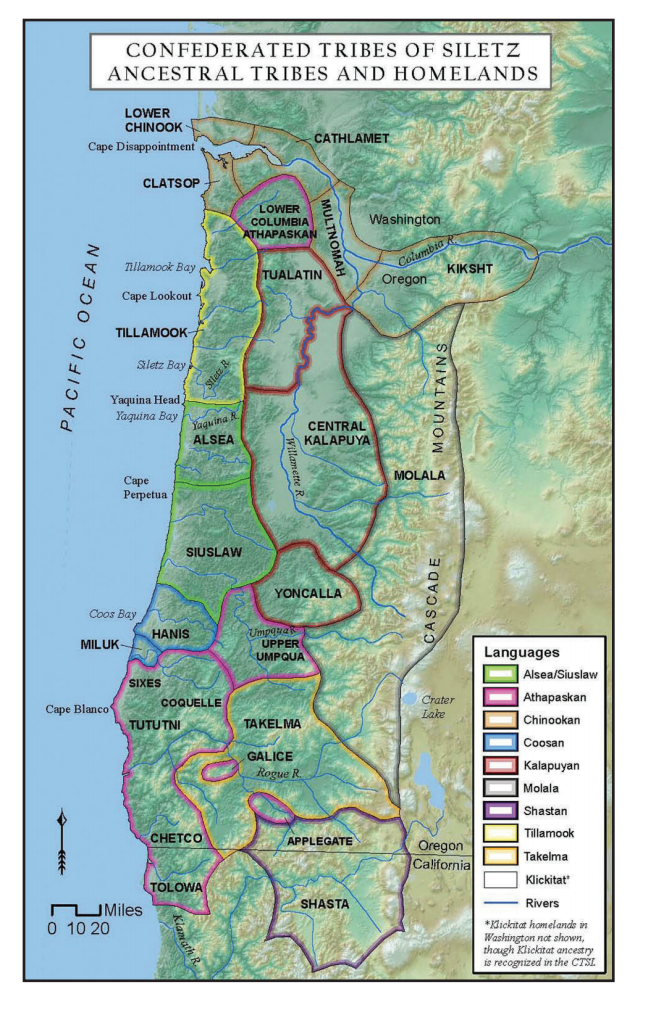 Good Places to Start Your Research on Kalapuya Indigenous People